There’s an emerging technology in illumination: Led lamps. LEDs (Light Emitting Diodes) have been around for ages, first used massively in the early electronics age, then applied to many decorative solutions, now they’re being used to provide mass market illumination products AKA ordinary lamps!.

LED’s advantages in a nutshell are very low power consumption (2-3 watts), very low heat (the energy is almost all transformed into light), very long life (10 years) and a unique kind of light that incandescent, fluorescent or halogen lamps can’t produce.

LED’s disadvantages, at the moment, are that most lamps can’t generate as much light as conventional ones, and because they’re electronically controlled, they can’t yet be dimmed by the same equipment we have in our living rooms. Also, the viewing angles are too low (15-20º typically). Some persons advocate that high density LEDs can be dangerous for the eye if you look directly to them, because they’re very concentrated pulse beams of light (no dispersion, a bit like lasers), but halogen for instance is well known to generate a lot of UV too and they’re massively deployed.

The craziness has begun and the big players (like OSRAM) have already started to R&D this market and have early products available. Just do a search on “led lamps” or “led spots” and see for yourself. 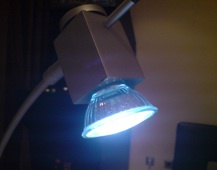 There are all kinds of LED lamps/spots. For 110V/220V, 12V, all sizes and shapes, all colors. Colors and LEDs is a funny subject from a scientific point of view, I won’t go into details but you’re not into electronics or psychics I suggest some fine Wikipedia reading.

Because I see innovation here, and it’s geeky, I’ve decided to order a pack of 10 LED lamps for an online store in Germany, encapsulated for the standard GU10 to use in my house as a direct substitute to the 220V halogen lamps I have. The lamps arrived a few days later and they look very nice, very hi-tech and extremely cool (like in temperature even after a few hours working. Unfortunately I ordered the cheapest 14 led density and they indeed provide much less lumens than I need so take 2 for the experiment is required. For now, my living room has a funny mix of yellow halogen and pure white led lamps. Handy for the Christmas season.

I’m convinced this trend has an huge potential, I would even dare to say LEDs will be ruling the illumination arena soon. Time will tell.