This is a pure 6510 assembly program for the Commodore 64 made by Bright Pixel in 2019, because why not.

The C64 was a famous 8-bit machine in the 80s and the highest-selling single computer model ever.

Its hardware and architecture set it appart from other 8-bit personal computers at the time. Unlike most of the others, the C64 had dedicated advanced MOS chips for graphics and sprites (the VIC-II), sound (the SID), I/O (the CIA), and many others.

These chips were not only powerful for the time, but they could perform their tasks autonomously, independently of what the main CPU, a MOS technology 6510 microprocessor, was doing. For instance, the VIC-II could generate interrupts on automatic sprite collisions. The CPU and the other chips also shared common data and memory BUSes.

To cope with all these chips inside 64Kbytes of addressable memory, the C64 had something called memory overlay, in which different chips would access different physical data locations for the same memory address. For instance the $D000-$DFFF block could be used for RAM, I/O or access to Character ROM, by the CPU, depending on a $0001 setting. Chips would have to be turned on or off, or instructed to look for data at specific RAM/ROM locations all the time to make the most of the machine as a whole.

This was impressive in the 80s, for a relatevily cheap mass-market personal computer.

Programming the C64 was more than a lot of fun, it was a form of art. Because of the way all this hardware was packed together, handling the machine meant knowing its memory map and registers by heart, and dominating quite a collection of tricks, some of which weren’t documented at all. What ended up being written for the C64 by the fervent community of developers all over the world went way beyond the imagination of Jack Tramiel.

Today, in 2019, the cult is still alive. There are vast groups of developers still writing C64 games and demos, restoring and using old machines, or using emulators. The SID sound chip was so revolutionary that it still drives a community of chiptune artists all over the world. The High Voltage SID Collection has more than 50,000 songs archived and growing.

At Bright Pixel, we like to go low-level, and we think that understanding how things work down there, even if we’re talking about a 40 years old machine, is enriching, helps us become better computer engineers and better problem solvers. This is especially important in a time when we’re flooded with hundreds of high-level frameworks that just “do the job.” Until they don’t.

This is a simple demo for the C64:

You can download the source code for it in this repository, change it and run it a real machine or an emulator. The code is all annotated, and you can use the issue tracker to ask us questions or make suggestions, we’ll be listening.

We used the Kick Assembler to build the PRG from the source. KA is still maintained up until today, with regular releases launched every couple of months. It supports MOS 65xx assembler, macros, pseudo commands and has a couple of helpers to load SID and graphics files into memory. Unfortunately, you need Java to run it, but it’s worth the trouble.

Here’s the setup in OSX.

This should be the contents of /usr/local/KickAssembler/KickAss.cfg

And we have this alias in our ~/.bash_profile for convenience.

There are plenty of Commodore 64 emulators out there. 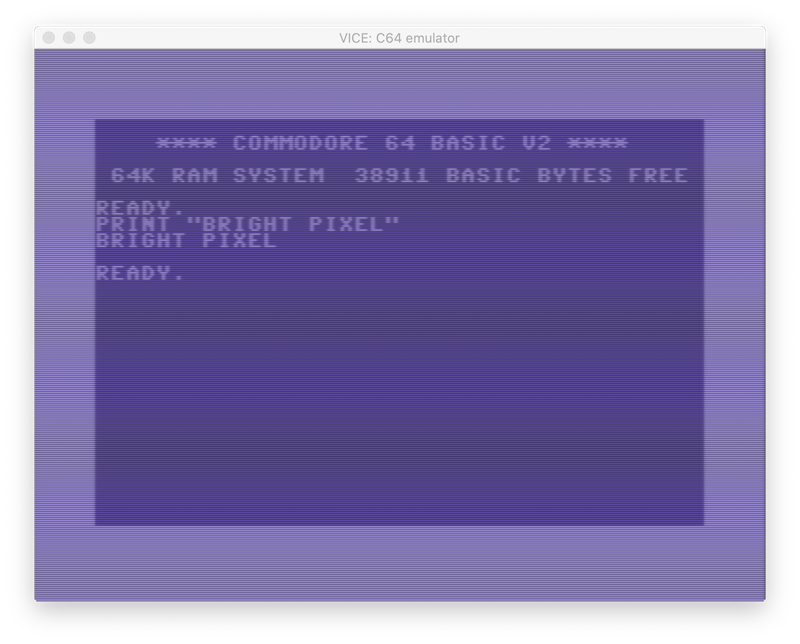 Debugging assembly when things go south can be challenging. Back in the 80s, debugging meant spending hours doing trial and error, rebooting the machine, reloading the code from the cassette (or disk drive, if you were lucky), and writing code to paper just in case you’d lose it in the process. 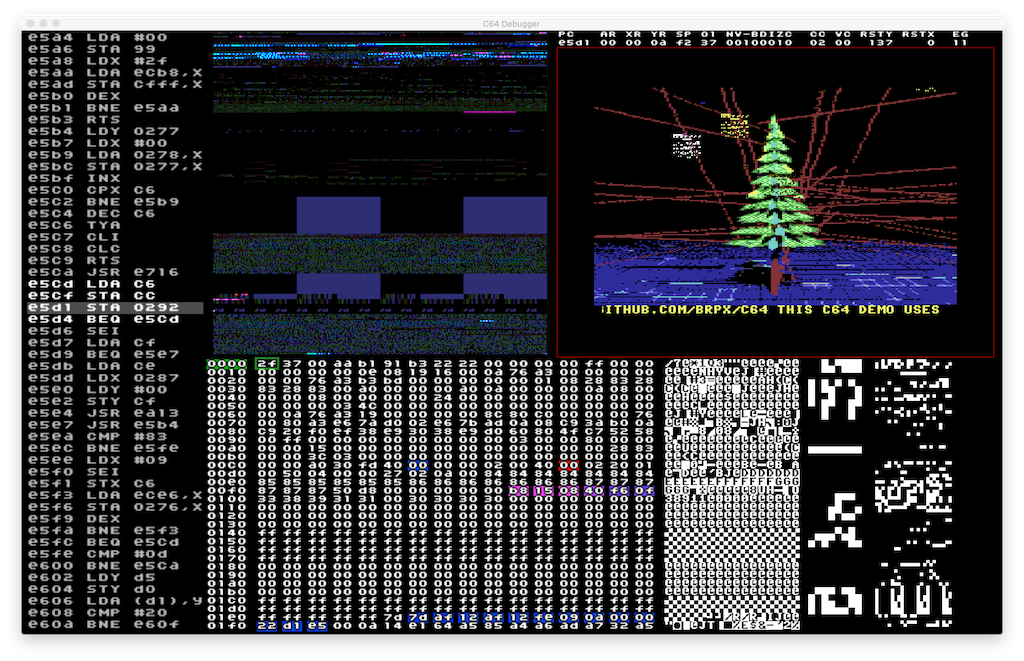 Dealing with graphics is a lot easier now too.

SID is short for the MOS 6581/8580 Sound Interface Device, the programmable sound generator chip inside the C64.

A SID file (song.sid) is a special file format, later popularized by modern age SID Players and emulators, which contains both the data and the 6510 code necessary to play a music song on the SID chip.

Here are a few things you should know about SID and SID files:

Kick Assembler has a helper script to load and parse a SID file directly into your project. loadSid() places the song code and data in the proper RAM location while assembling, and provides the initialization and play subroutines which you can use with your code. Check here for more information.

These are handy resources you can use:

We’ve annotated the .asm sources with all the information you need to understand what we’re doing, why, and where to find more. You can start by looking at the main card.asm file and move from there.

To assemble the sources into an executable PRG file, all you need to do is: 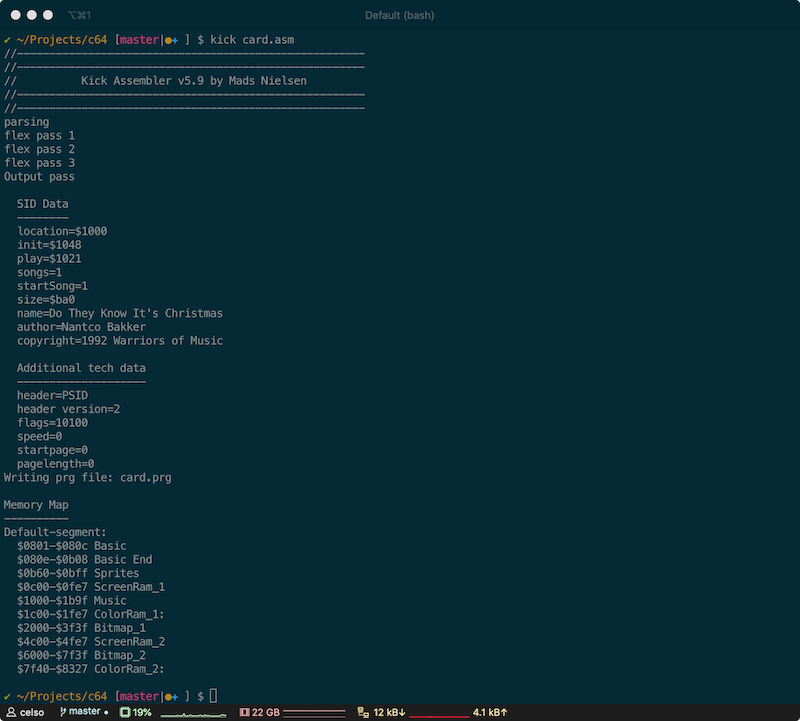 Here’s a quick run through the main components of this little demo. Find the rest of the information in the source itself.

Kick Assembler has a couple of helpers to load known file formats into memory at assembly time. We’re using two of these, LoadBinary() and LoadSid().

Setting and using the interrupts

We’re using raster interrupts with our demo. These interrupts trigger at specific scan lines that we set with $D012.

First, we need to turn on the interrupts and set the first one when the program starts. This is how:

Later we use the irq1 and irq2 interrupts.

irq1 is triggered at scanline 240, and we use it to change the VIC-II to text mode, scroll the bottom text message and play the music.

irq2 is triggered at scanline 10, and we use it to alternate between the two pictures by switching the VIC-II to bitmap mode and pointing it to the right memory banks.

Here’s irq1 from the code:

Notice how each interrupt needs to:

The C64 doesn’t have a random number generator, so we need to find a few unpredictable variables to play with to calculate one. This is a clever way to return a random number:

A Sprite or a Movable Object Block (abbreviated to MOB) is a piece of graphics that can move and be assigned attributes independent of other graphics or text on the screen. The VIC-II, which is responsible for this feature of the C-64, supports up to eight sprites.

You can design your sprites with Spritemate and export them the Kick Assembler code directly by pressing file::save-file::kick-ass-hex.

You can check this page for more information about Sprites and how they work.

A few things you need to know about Sprites:

We’re using eight sprites with this demo with two different bitmaps. The sprites are displayed on the screen1 only, have fixed horizontal offsets, fall down the screen by changing their vertical offset in the main loop (we’re not using the interrupts to handle the sprites), and randomly change colors when they start at vertical offset zero.

The music is loaded to the demo using an external SID file and Kick Assembler’s LoadSid() helper.

You can read above for more information on SID and SID files.

Playing a SID music in Kick Assembler has three parts:

Again, be careful. A SID file contains both the data and the code to play the music. The code must reside in a specific RAM address, specified inside the SID file, and changes from music to music, which means that if you want to use another .sid file with this demo, you need to make sure that:

That’s it. We hope you enjoyed reading this. Hopefully, you’ll be playing with this demo, changing the source, and making it your own, feel free to use it. We had a lot of fun coding it.

If you have questions or suggestions, leave them in the issue tracker, we’ll be listening.

If you run the demo or change it in any way, post it in the social webs, using the tag #c64brpx, or mention @brpxco.